To cut long story short – nothing is wrong. The recent series of decrees have added Russia to the list of free markets including the US, UK, US, Australia, Canada, China and Japan, where parallel import has already been working for many years (with country-specific unique features, but still) .

So, how is Russian parallel import different from other countries?

The recent Federal Law No. 213-FZ[1] of 28 June 2022 set out the new IP rights exhaustion model in Russia. Previously, like in the EU, Russia applied regional model effective in the countries of the Eurasian Economic Union. From now on, the international principle comes on the scene. The Law will be effective by the end of 2022 with a possibility for further extension.

This newly introduced system has several nuances. First of all, it affects only some of goods that will be allowed for parallel import. The list of the “chosen ones”[2] includes digital devices, clothing, industrial and domestic equipment, cosmetics, raw materials etc. – 56 categories in total – and also names exact brands, such as Volvo, Tesla, Xbox, urban Decay, Electrolux, Dyson etc.

Another specific feature is flexibility. It seems that brands can pull out from the list if they guarantee direct import of goods or continuation of manufacture on local factories. For example, Nivea, Rexona, Vanish, Domestos, Cillit, Dosia, Tiret, Nescafe, Nespresso are said to have requested to exclude their brands from the list, while Siemens, BMW and Lego in contrast have joined the “club” after deciding to leave the market.

Several online retailers expressed an idea that parallel import should not be exclusive and that it would benefit the consumers and retailers if all categories of products were available for such import.

It is a good question indeed, whether parallel import is beneficial at all and to whom. On the one hand, it creates a more competitive market landscape, and consumers have access to the products they need. The original manufacturers also have revenue increase from sales in Russia even if no direct distribution takes place, which will compensate to a certain extent the financial losses caused by sanctions and logistic complications.

On the other hand, parallel import makes it more difficult for the manufacturers to control prices and stay competitive, regulate the quality of goods and block counterfeit, while for consumers it might be challenging to get warranty service and distinguish between original and counterfeited goods.

Under the current circumstances, the suggested model of selective and temporary parallel import aims to serve interests of the domestic market, local consumers and manufacturers of original goods. As for the drawbacks mainly consisting in expected flow of forged goods, there are several available and useful tools against infringements, such as constant monitoring of the market, sending CDLs, filing complaints with the marketplaces and entering trademarks into Customs Registries of the countries forming the Eurasian Economic Union.

“Little pig, little pig, let me come in” – says the Big Bad Wolf; “No, not by the hair of my chinny chin chin” – answers the Little Pig, – “Then I will blow your house”, threatens the Wolf. Indeed, a notorious court decision taken on 2 March 2022 in Arbitration Court of the Kirov region of the Russian Federation, which threatened the interests of Peppa the Pig copyright and trademark owner, Entertainment One, was widely cited by mass media in a wave of speculations about the collapse of intellectual property in Russia.
Fortunately, as in the well-known fairy tale, the most recent appeal decision proves them wrong and the little pig won again. The hearing at the Second Court of Appeal took place in the city of Kirov on 21 June 2022 reversed the earlier first instance decision. The full text of the court decision has yet to be published.
Obviously, the initial decision was based on misreading and misinterpretation of the Presidential Decree “About application of special economic measures in connection with unfriendly actions of the United States of America and affiliated with them foreign states and international organizations” No. 79 of February 28, 2022.
The recent positive decision is one of many lawsuits against trademark and copyright infringement won by Entertainment One. There have been around 300 successful cases in the past years in Russia, which stopped the unauthorized use of popular cartoon characters and brought the company compensation reaching about EUR 500,000 in one case.

The Administrative Council of the Eurasian Patent Organization approved the amendments to the Statute on Fees of the Eurasian Patent Office in part of applications and patents for inventions. The amendments result in 30% increase of the official fees, which will be paid on or after 1 July 2022, irrespective of when the payment is due. Therefore, if there are any fees due with respect to patent applications, it is possible to save on the amount of these fees by paying them before 1 July 2022.

The complete list of the new official fees that will become effective on 1 July 2022 is given below.

We are extremely proud that our attorneys, Eduard Shablin, Vadim Chagin and Olga Gribanova have been listed among leading trademark, patent and copyright practitioners.
World IP Review has recently released a new guide of the top IP lawyers – WIPR Leaders 2022. The nomination period lasted four months, during which the research team selected over 1,700 best lawyers in the field out of 12,000 nominees.
For choosing this year’s leaders, WIPR studied candidates’ practice history, notable cases, level of expertise and extra activities in the field, such as published articles and educational initiatives, and Patentica’s nominees have lived up to these standards.
Patentica’s dedication to clients, high rate of successful cases and professionalism have been rewarded by positive assessment from WIPR.
You can see the new rating at:
https://newtonmedia.foleon.com/wipr-le…22/russia/

The delegates from Patentica, Ms. Olga Gribanova (Partner, Head of the Trademark Department, Trademark Attorney) and Mr. Eduard Shablin (Partner, Head of the Moscow Division, Patent Attorney) are very pleased to have attended AIPPI 125th Anniversary Celebration Conference in Brussels, which took place on May 13, 2022.
We thank our colleagues, partners and friends for fruitful and long-awaited meetings. Please feel free to contact us for any questions related to intellectual property by sending an email to info@patentica.com or by writing directly to Olga (olga.gribanova@patentica.com) or Eduard (Eduard.shablin@patentica.com).
We look forward to new offline events and cooperation! 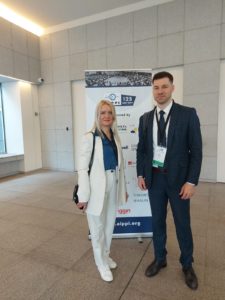 In particular, License No. 31 makes an exception for transactions made in connection with patents, trademarks, copyright and other form of intellectual property. As for now, the following transactions are authorized:

The reconsideration of the previously imposed sanctions by the U.S. Government is beneficial to all of the U.S. owners of Russian intellectual property assets facilitating payments to enable the U.S. applicants and owners to file, prosecute, register and maintain their patent, trademark and design rights in Russia.
The full version of the License is available at: https://home.treasury.gov/system/files/126/russia_gl31.pdf

In general, the Russian and Eurasian patent offices operate as usual providing patent and trademark registration services to all of the foreign applicants – irrespective of their origin and presence in the Russian market.

As always, we are keeping a close eye on all of the ongoing law updates and amendments and would be happy to provide any legal assistance and advice on the intellectual property matters to our clients from all over the world.

Dear Colleagues, we are pleased to inform you that delegates from Patentica, Ms. Maria Nilova (Managing Partner), Mr. Vasiliy Bykov (Patent Attorney, Chemistry & Biology) and Ms. Julia Malinina (Patent Expert, Chemistry & Biology) will be attending the upcoming INTA 2022 Annual Meeting in Washington ВС, April 30 – May 4, 2022.
If you wish to arrange a meeting with Patentica representatives, please feel free to send us a letter at rsvp@patentica.com
See you in Washington DС!

Dear Colleagues, we are pleased to inform you that PATENTICA will be represented at the IPBS Europe 2022 in London, on March 29-30, 2022 by Maria Nilova, Russian and Eurasian Patent Attorney, Managing Partner.
If you wish to arrange a meeting with Patentica, please feel free to send us a letter at rsvp@patentica.com
See you in London!

On March 09, 2022, the Moscow Arbitration Court satisfied the claim of Zentiva Pharma against Farmatun-1, Dinamika and MC Dinamika for the protection of patent rights in relation to Dolphin nasal washing device (utility model No.151,829). The Defendants were forbidden to sell, offer for sale and store for these purposes their medical product “Duolor”.
Until 2018, Defendants were engaged in the production of devices and nasal washing products under the brand name “Dolphin” for Zentiva Pharma. After the transfer of production, they released under their brand a product “Duolor” similar to “Dolphin”.
Defendants insisted that their device is manufactured according the utility model No 196,933 and does not contain “a dispenser having an axial channel” described in Zentiva’s patent. But this argument was refuted by the patent examination. Further, the Сourt noted that the Defendants’ reference to the later utility model No. 196933 does not influence on the consideration of this dispute regarding infringement of the Zentiva’s patent.
Thus, the Court found that the Defendants’ product “Duolor” contains every feature of the plaintiff’s utility model, and a permission of the patent owner for production and sale has not been obtained. The Court satisfied the claim and recovered from the defendants the costs of the examination.